It’s a Friday afternoon, and the weather is wonderful here in North Wales. Sitting outside and typing this up has crossed my mind several times but the air is still chilly. However, I don’t think my pyjamas, a pair of fluffy socks and my boyfriend’s hoodie- no I have not gotten changed today- would keep me warm enough against the bitter wind. Besides I’m more than comfortable sat in the large sofa with the dog beneath my feet. I believe the name of the house we’ve been staying at even translates to ‘windy hill’ from Welsh so I don’t know what I was expecting. Still, I’m not complaining too much. It has been temperatures such as 27 degrees celsius back at home which I am not prepared to go back to. It has been a very comfortable 16 degrees celsius whilst we’ve been in Wales- very autumnal and very my kind of temperature. But this blog post isn’t about me waffling on about the weather. My family and I have had a very pleasant stay here in Wales and here’s a few things that we have been up to.

Saturday the 4th August was when we left a very hot Hampshire. We didn’t exactly have the quickest journey either. We travelled from the south of England to the north of Wales- 6 hours in total. Seems long? I did 24 hours when I visited the French Alps… never again. Time seemed to go by surprisingly quickly though. Perhaps it was because I fell asleep longer than I predicted or maybe my incredibly long car playlist made the car journey more bearable. We made a pit-stop once we were in Wales and roughly halfway to our destination. We picked up a sandwich, packet of crisps and a drink each from Marks & Spencer and sat by a beautiful lake with a fountain. Although the scenery was lovely, there was a constant battle between me and my arch nemesis, The Wasp. We gave my dog, Lexie, a quick little walk around the green and popped her back in the car before ourselves and we set off again. A few hours later we arrive in a familiar village, Rhosgadfan. After climbing a winding, steep hill to the cottage, we finally arrive around five pm. Despite the incredible long journey, it’s all so worth it. From the front of the house, you are surrounded by mountains and fields containing horses and sheep. From the other side, looking out from the garden, the house overlooks the town, Caernarfon below. Beyond the town is the vibrant greenery of the fields and trees, and in the distance is the coast, with a blue streak running along the bay. You can see everything from here. When looking outside the window of the house, it’s like looking in on the world from an outside place. It’s breathtaking.

The first day of staying at the house. We didn’t do anything. I think everyone was still a bit tired from the long car journey the day before that we didn’t want to do anything which required a lot of effort. Breakfast at 11 am. Staying in pyjamas all day, you know how it goes. I was reading most of the day. I was almost surprised in myself. I used to read tonnes. Finished books by the end of the week but after finding bad book after bad book I had almost given up completely in beginning new books. Until I found Miss Peregrine’s Home For Peculiar Children. Many of you may know that it is in fact a movie starring Asa Butterfield, Eva Green and Samuel L Jackson- that’s how I discovered the book anyway. After watching the movie and enjoying it thoroughly, I finally bought the book. Page after page I turned and something prevented me from putting it down. Perhaps it was the gripping story line? The creepy but realistic pictures that came with the narrative? Or maybe it was the lack of other things to do. Nevertheless, it was a book I was determined finish either that day or the next. I had brought the second book to the series with me in case I had finished it and I’m glad I did. Later that day, I spoke to Jarrod for a few hours. Whilst I was enjoying the cool weather, he was enjoying the hot weather in Sorrento, Italy. From the pictures he sent to me of the view, it looked beautiful, plus, there was a lot of pasta. Sounds perfect if you ask me!

Monday we had to be out of the door early. So instead of a ten o’clock wake up it was a seven thirty, bleary eyed stir. Mum and Dad had organised to go on a steam train from Caernarfon to Porthmadog. I had been on steam trains before, but this one was completely different. For starters it was a much longer journey. It took us about two hours- two and a half hours to get to Porthmadog. Another difference was how nice the train itself and the service was. You could order food, buy drinks and snacks, it was like being on the Hogwarts Express! Another thing I feel like I should mention is the tickets, but not just mine, my sister’s, my mum’s nor my dad’s but my dog’s. Lexie had her very own ticket and it’s by far the cutest thing. 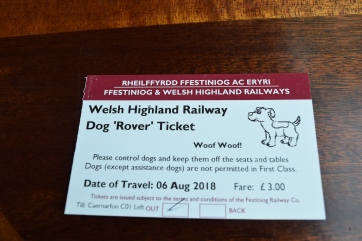 I’m pretty sure I took up a big chunk of memory with all the photos I took on my camera. The scenery was incredible. The mountains, the farms, the serene setting. Just countryside. After quite a long ride, we arrived at Porthmadog harbour. We had a wonder around; I think my dad enjoyed looking at the boats and we found a small, rough-looking pub to have something to eat and drink. It may have been not very nice-looking but the food was incredible. Chantal and I had a vegetarian lasagne whilst my mum had a normal lasagne and my dad had ham, pineapple and chips- although I have to say, I’ve never seen ham, pineapple and chips on a pub menu before. 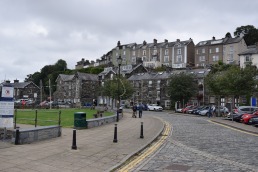 Afterwards, we wandered around the shops. I found a quaint little bookshop which sold the third book to Miss Peregrine’s and decided to buy it. I wasn’t sure if I would finish the second book as well. I also found a small shop which sold a lot of different things; from trinkets, to art prints, to accessories, to statues and games. Something caught my eye and it reminded me of Jarrod instantly. ‘What Do You Meme?’- A card game like ‘Cards Against Humanity’. I knew I had to buy it for him.

Soon enough we had to get the last train back to Caernarfon. The journey back seemed so much longer than the journey there. Chantal and I were so tired that we both ended up dozing on the train. We both knew that we couldn’t fall asleep completely because we were both very acutely aware that this was public transport. 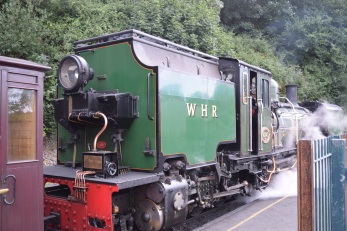 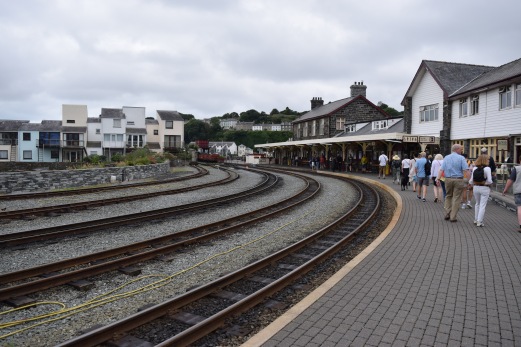 Tesco’s was the only thing left to do. We were running out of food already, from the small supply that Mum had brought with us, and needed the essentials; bread, milk, dinner for the next few nights. One thing I noticed down one of the aisles was an American section. Either I’ve been so incredibly thick all my life or there isn’t an american section back home. I was enthralled and literally wished I could buy every item on those shelves. From Lucky Charms to Hershey’s, from Nerds to Jolly Ranchers, products I thought you couldn’t get in stores like Tesco. I’ve been stupid this whole time, haven’t I?

Another chill day. Breakfast at 11 am, you know the drill. I spent most of my time talking to Jarrod, catching up on what he’s been doing and telling him what I’ve been doing. Chantal and I played some board games we found in the cupboard upstairs and Jarrod (kind of) joined us. What I mean by that is we played the board games and Jarrod was on loud speaker on my phone, perched upon the dresser. He became very useful. He reminded Chantal and I how to play chess- although by the end of it, my queen ended up swimming in my glass of orange squash so it could’ve been Wizard’s Chess, really. Nothing very exciting happened on Tuesday. We decided to have a quiet day so we could have a more active day on Wednesday.

Anglesey was our next destination. Mum found out about this RSPB place where we could see all the different types of birds. Everyone was excited with anticipation. What would we see? Would we get up close? The journey was a trek; about 2 hours in the car. And it was all for nothing. We knew there were country roads in Wales but this monster of a road we went up had a whole other definition. Cars were parked outside the RSBP centre right along the already-narrow road. Queues of vehicles had to reverse, wait or stop to let others come through. We didn’t want to go through this chaos.

Instead of seeing the birds, we found this quaint little town with a beach nearby to give the dog a run. It was a lovely place to have a walk and to take lots of photos. Lexie enjoyed running around on the beach, chasing after her ball. We took a wander through the town. There were little independent shops and a couple of pubs. We were too late for food so we all had a drink and a packet of crisps or peanuts to share in the first pub we could see. As we headed back to the car, Mum, Dad and Chantal wanted an ice cream (I wasn’t in the mood for one) so we stayed outside a little longer, back along the beach, watching the ocean’s waves crash in and roll back out again.

Thursday was the last day we were going to go out this holiday. Friday was packing, preparing to leave on Saturday. We went to Bangor on this day. A while ago, when I was still choosing my options, we stayed in this exact house so we could visit the Bangor University campus. It was a beautiful university but I decided it was just too far away. Instead of visiting the university this time, we looked through the town. There, we found a miniature town, kind of similar to a town local to me; lots of popular shops, pretty surroundings, pedestrian walkway rather than a road where vehicles drive along. I looked in a few, such as CEX Exchange. I was tempted to buy Assassin’s Creed: Ezio Collection or Uncharted 4: A Thief’s End but realising that I have too many games to finish as it is, I managed to resit.

Continuing our walk, we approached a pier. It was incredibly high up and had benches and plaques with the names of the deceased on them. Little stalls had souvenirs on sale and crabbing equipment- there were a few people crabbing. Walking back towards the exit of the pier, we saw a pub and decided to grab a bite to eat. Unfortunately, the kitchen was closed and was only able to offer a panini  but that was okay with us. A mozzarella and red onion panini with a glass of Diet Pepsi was just what I needed.

A super long blog post, I know. I started this on the Friday before leaving the house in Wales (as you can tell from the introduction). I did the first half of this in Wales but only just finished it now, mainly because I forgot about it, but the main thing is it’s done now! This was more of a journal approach to a blog post- again, experimenting so let me know what you think!