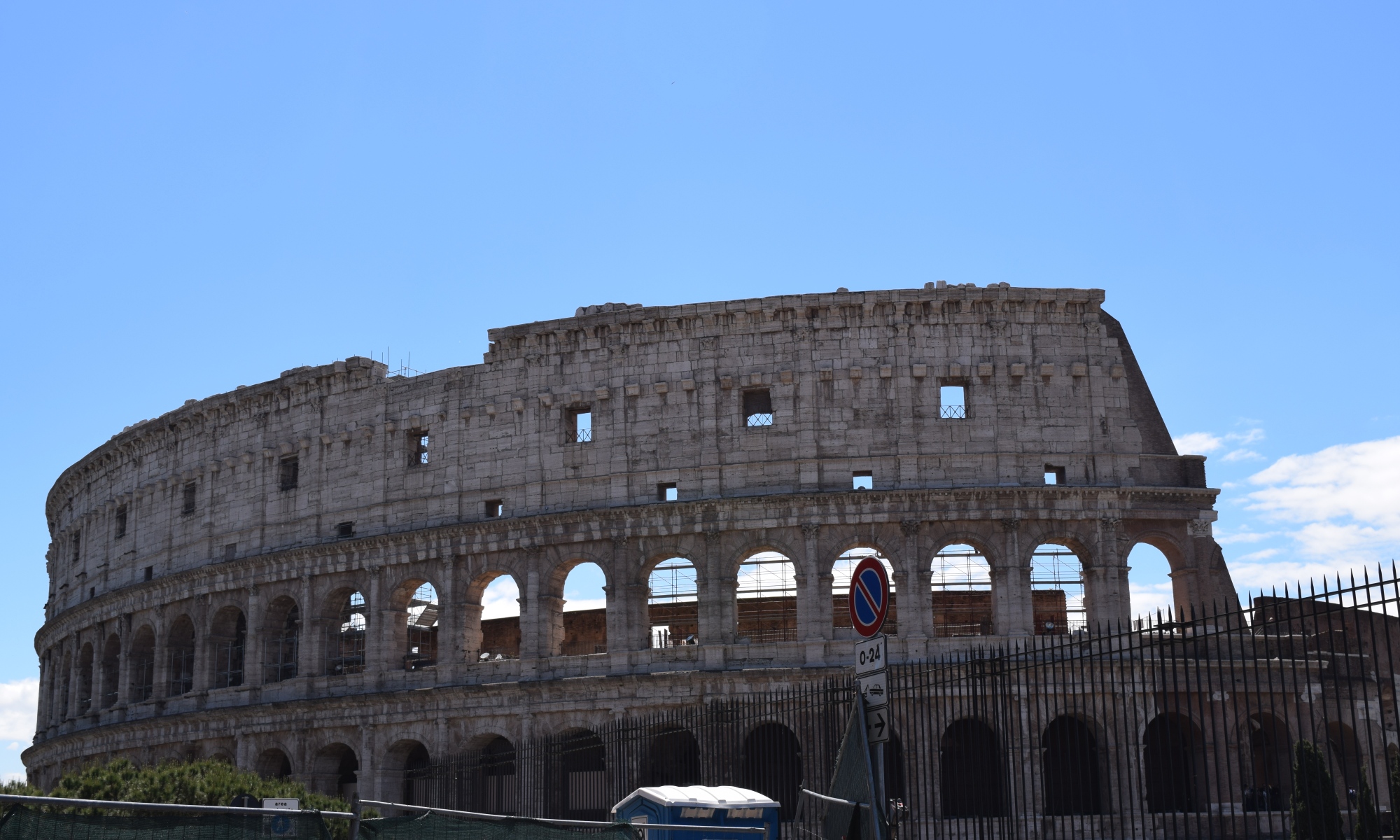 We were told the previous evening by our daily hotel weather news report card (and a few jelly sweets) that the weather would be beautiful the following day – and that it was.

It was a late start this time as we hadn’t planned much to do, compared to the other days. The Colosseum was on our schedule so after a rather bigger breakfast than usual, we headed out around eleven to see the infamous tourist attraction. It was lovely walking in the sunshine, I didn’t even need my jacket. We walked down the Corso, where all the shops were, to get to the Colosseum, whilst dodging all crazy traffic – you just have to go when crossing the roads in Rome. If you don’t, you’re stuck on the pavement forever.

Once we got to the Colosseum, we were completely blown away by the great queue, which must’ve been at least a two hour wait, just for tickets alone; God knows how long it would’ve been to get into the actual Colosseum as well. Due to this wait, in twenty degree heat, with no sun cream, where we would’ve burnt, we decided to see if we could get any closer. Luckily it was possible through a few small side streets, and I managed to get a few shots. I don’t think it mattered too much that we didn’t get to go in. After all, the exterior is grander than the interior.

After we got the photos we desired, we headed back the way we came, except this time, cutting down little side streets to avoid the huge crowd for the Colosseum. We stopped off at a shopping centre with lots of Italian brands which I had never heard of before. Jarrod bought a really pretty, old-time hardback notebook with a small lock – it looked like the type of book which would be a prop on a Harry Potter or Merlin set.

We found a very cute restaurant with fairy lights and wine bottles covering the entirety of one wall and holly decorated around the door frame. We ordered some bruschetta and a coke each. For main I had a margarita pizza and Jarrod had a caeser salad (a big difference in choice!)

Once we had finished, we headed back down the Corso. During our walk, Jarrod was banging on at me about wanting to buy me more Lego. I, of course, refused because he had spent enough on me the other day when he bought me the Harry Potter Hogwarts Express. At first I thought it was hypothetical but then I realised he was serious and I was even more insistent that he shouldn’t buy me anything else. Jarrod fancied Venchi’s ‘gelatoshake’ so we stopped off there, and he was still tugging on my shirt like a child. In the end I gave in so we went back to the Lego store after Venchi. I picked out Overwatch’s Reinhardt and D.VA and Jarrod bought a little one for himself – an Overwatch payload with Tracer and Widowmaker. As bad as I felt for Jarrod spending so much on me, I was extremely happy to have the Lego Overwatch, as it was something I had been willing to get for a while. Swinging the sunflower-yellow Lego bag as I walked, we stopped off at one last place – another gelato shop. I had seen on the way that this particular place did Nutella gelato and I was hoping to try it at some point. I got two scoops of ice cream; Nutella (of course) and Dulce de Leche. Absolutely delicious.

When we got back to the hotel, I FaceTimed my mum, Dad and sister, as I hadn’t spoken to them properly in a few days and I updated them on everything. Even though I was heading home the next day, it was nice to talk to everyone again. This holiday had been lovely, but there’s no place like home really, is there?

Like usual, but for the last time, we went out for dinner at a place Jarrod had been before who do lovely steak. I finally ordered an Aperol Spritz; a drink which is sold literally everywhere in Italy, that I had heard is really nice but hadn’t drank until then. The aftertaste was quite bitter but it was refreshing and I considered buying some at home and making it myself. As something different for a change, I ordered a seafood starter; calamari and shrimp. Although the shrimp was a little too fishy for my liking, the calamari was lovely. As usual, Jarrod ordered his mozzarella and parma ham starter. The thought of cheese as a starter again churned my stomach; even though I never thought I’d say this, I had had enough of cheese for now. We both ordered steak and green beans – Jarrod left his beans – and a side of french fries each. Although this wasn’t really a traditional Italian meal, it was just as nice. I had a dark chocolate fondant pudding with a white chocolate centre for dessert, (very chocolatey but very good) and Jarrod had profiteroles with a chocolate cream inside and a vanilla cream covering the outside.

Towards closing for the restaurant, the staff handed every customer left a free shot glass of Limoncello – a sweet lemon liquor. This was actually the second time this happened to us. The night before we were given the same, on the house. Whether it’s an Italian thing for the customers left towards the end of the night, I do not know! What I do know though is next time, when you plan on doing a shot (even though Limoncello traditionally isn’t taken as a shot) just do it next time and don’t spend ten minutes debating on doing it.

Despite the slightly sloppy service from the staff – we weren’t acknowledged much at all and were waiting nearly an hour for the dessert menu alone – it was definitely a place I’d consider visiting again if I’m ever back in Rome.